Toto says, "Let the Truth be Known; I Was There!"

Chapter 7: The Battle of Orville Acres

“The robin departed and in no time returned wearing the cap of an acorn. The cap rested on its head and partly covered one eye. If not for its beak, the cap would have covered his entire head. So, the robin could see, but with great difficulty, and only when holding its head at a curious angle.

“Before I could ask the old robin about his cap, he said, the old robin who recently visited you, has called upon my services. I’m Robin Hood. I take kernels from the rich and pop them for the poor.

“But you’re the same boyd I spoke with earlier,” I claimed. “Of that I’m certain. Even the scar beneath your beak is the same. You’ve merely donned the cap of an acorn.”

“You foolish scarecrow,” said he and waved his wing grandly at the great number of robins that returned with him. If each of these boyds were so hooded, would you, you who have no brains, be able to tell them apart?

“Since that boyd had brains, who was I to argue,” said the scarecrow with a whimper equal to the sorrow in his voice.

“Now, said Robin Hood, me, and my merry boyds will only feast on the fluffinuffinous of the finest kernels. And, scarecrow, next time you see Orville, you tell him Robin Hood was here! Now watch while me, and my band of merry boyds make merry!

“The doors of hell must have parted.” With a tremble in his voice, scarecrow continued in a whisper, “The robins swarmed like locust. All I could do to scare them was to yell and shout, which I did with great gusto.”

Hush your head, said Robin Hood. Your loud mouth is giving me and my boyds headaches and ruining our merry-making.

“Despite Robin Hood’s rage and the brutal tone in his voice, I continued to shout at those wicked birds and as I grew bolder, I shouted louder.”

Enough with the noise, Robin Hood said. Let’s fill his face with the corn he greedily hordes. Acres and acres of corn you guard and you can spare none…for a few little boyds? You’re a wicked and greedy scarecrow.

“Robin Hood dug his feet into my top hat and hung from the brim upside down. With his cold black eyes, he devoured my soul,” whimpered the scarecrow. “Despite my terror, I wondered why his acorn cap didn’t fall from his head. Before I could ask, he said. You want corn so bad. Me and my boyds will bury you in it...and do so merrily. Then he shouted, Boyds, make merry. Let the popping begin! 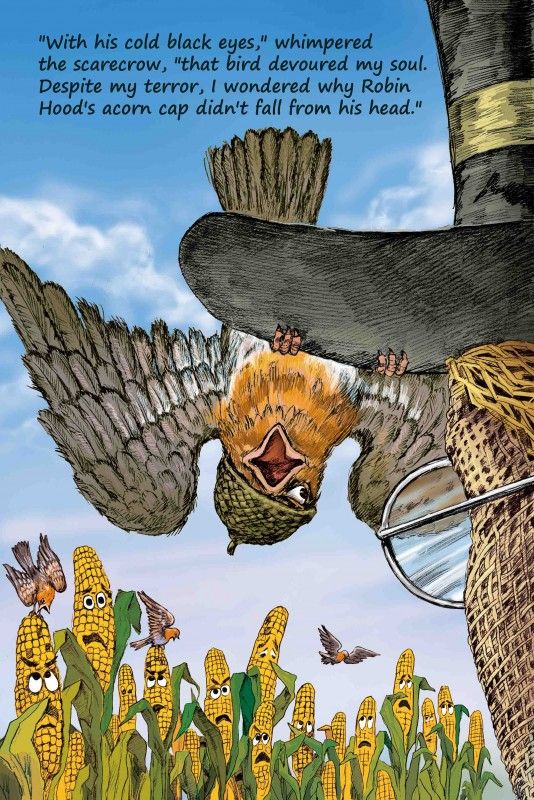 “Perched on the cornstalks, those birds positioned those popping ears at me. While they brutalized me with bursting kernels, their cruel and vicious insults, debased and demoralized the ears of young corn. Those birds said terrible things,” sobbed the scarecrow. “Robin Hood yelled in one stalk’s ear, Your daddy was born in poor soil and is nothing but a no good hybrid.

“On another stalk, a large bird squawked, you ain’t but grits! Only fit for boiling.

“And another, Orville wouldn’t even feed you to his hogs!

“This went on for hours,” cried the scarecrow, “and…and….” He stopped to regain his composure. After a bit of pitiful sniffling, he wiped his nose on his sleeve.

“That stalk over there had a fine young ear,” said the scarecrow with a wave of his straw hand, “until a robin shouted that it was too ignorant to ever earn a tassel.”

“In the bit of time that I spent on my cross, I found that much of this field is young corn. And…, young corn bruises so easily,” said the scarecrow. “Those young and tender ears hadn’t been around long enough to toughen up their kernels. The boyds knew how to play them…how to get to them. When those boyds spoke ill of their family seed, looked down upon their noble heritage, and mocked their upbringing, those poor young ears overheated all too quickly, and... popped!

“Turn a deaf ear, turn a deaf ear; you don’t have to pop. If you lose control, the boyds win….This field looked like a snowstorm. Many of the kernels over popped and floated aloft…others hung in midair until the charm of field melodies carried them to parts unknown. Those with the shortest fuses exploded like firecrackers, leaving not, but dust upon the leaves of their brethren. How long those boyds assaulted us, I don’t know because I’ve no watch nor the brains to tell time by the sun.”

“That must have been dreadful,” said Dorothy, “but for your information, I do believe that Robin Hood had a speech impediment. Robins are birds, not boyds, but how would you know that…in that you claim not to have a brain? In any event, that’s behind you. I can see much of your body and parts of your legs. You’ll soon be down from your pole and Robin Hood will terrify you no more.”

“What can we do, Toto? The scarecrow is crippled and can’t walk.” Dorothy said.

I trotted over to and directed my attention to William’s tail end because that was her only part not buried in corn. “The scarecrow is of modest weight. William, will you carry him until we find him some pants and straw to mend him?”

Dorothy left the scarecrow and joined me. Irritated, William’s ears flickered. Dorothy tilted her head up a bit and after placing a hand on each side of William’s head, pulled her two-tone face close. Rubbing her nose against William’s,” she said, “Is our poor, poor William having a melt down? You just go right ahead. You’re the dearest and cutest little cow…. Everyone is entitled to their mood.”

“I need no further favors. You worked all day getting me down,” shouted the scarecrow from the side of the road. “I’m a tickled pickle to be off that pole and I can walk…see? I’d appreciate your setting my legs into my boots and I thank William for finding them.”

With that, William left the great pile of popped corn and we were on the yellow brick road again…ten minutes later with the crippled scarecrow on Williams back.

“I’ve learned your names by observation as I hung from the pole, but I have no name to share,” said the scarecrow.

"I’ll name you if you don’t mind?” With no objection, Dorothy continued, “Your name shall be Scarobins…”

With a curious twist of my head, I looked up at Dorothy and saw that William had stopped chewing and stared.

With her hands on her hips and a huff she said, “Scare…robins. Get it?” Turning to the scarecrow she said, “We shall call you…Scrobins for short, giving you both a name, Scare Robins and nickname, Scrobins…and each is as good a name as any man’s.”

“A name as good as any man’s…I like that greatly and thank you,” said Scrobins, “but…will my name change when I scare…crows?”

“No,” Dorothy replied with a delightful smile, “one’s name shouldn’t define them. You’re already a scarecrow. Now, we have to get going.”

“Where are we going?” asked Scrobins.

“We’re going to the Emerald City to ask the Great Oz to send me and Dorothy back to Kansas. And you’re going to stay with the first Munchkin that can mend you,” I replied.

Scrobins ignored me. “Dorothy, where’s the Emerald City? Why Kansas? And who’s Oz?"

"Why, don't you know?" she returned, in surprise.

"No, indeed! I don’t know anything. You see, I’m stuffed, so I’ve no brains at all," he answered sadly. “I thought I mentioned that.”

“Yes, plenty of times,” I replied.

Dorothy’s narrowed gaze bad-dogged me. "You’ve mentioned having no brains, Scrobins, but how can that be? You act no differently than us."

"If I had brains, I’m certain that I’d be able to answer you, Dorothy. Do you think," the straw man said, "that if I go to the Emerald City with you, that Oz would give me some brains?"

"Who knows," she replied with a sigh and a warning to me, with a narrowed gaze from her dark musket ball eyes. "But you can come with us…, if you like. If Oz can’t help, you’ll be no worse off."

"Thank you," Scrobins replied with a bow. “I accept your generous offer.”

William bared her toothy grin as she plodded down the yellow brick road. I frowned back in return.

"Wait, Scrobins. You have a job!” I said. “Your place is back there defending the corn from that terrible Robin Hood. Consider that, and once we get you some straw and a new set of pants to hold it, you can be on your way.”

“My place may be with the corn, but,” Scrobins said, “the operative word in your sentence is consider. That requires me to think. Without a brain, thinking is something that I can’t muster. Therefore, I’m coming with you to the Emerald City.”

With a wink of her eye, in a low mooloadious voice William said, “Irrefutable logic.”